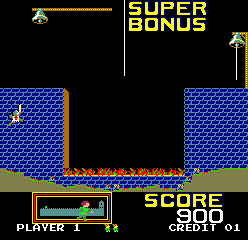 Hunchback is an arcade game developed by Century Electronics in 1983. The player controls Quasimodo from the Victor Hugo novel The Hunchback of Notre Dame. The game is set on a castle wall. The player must cross the screen from left to right avoiding obstacles in order to ring the bell at the far right. Obstacles include pits which must be swung over on a long rope, ramparts which must be jumped (some of which contain knights with spears) and flying fireballs and arrows (to be ducked or jumped). Eventually, after completing a number of screens, the player must rescue Esmeralda. If this final screen is completed, the game begins again at a faster speed. The hunchback character was originally to be Robin Hood. Hence the green costume and the game stages with arrows. The artist who drew the Robin Hood character left the company before the decision to change the theme to Hunchback. By the time a new artist was taken on, the green costume had become accepted and no-one questioned it (someone commented that the Robin Hood character, as drawn, looked like a hunchback).

Victor Hugo never could have expected that his creation Quasimodo, the Hunchback of Notre Dame, would run such an obstacle course as is dished up in this game, dodging fireballs and arrows while leaping over pits and pikemen, sometimes with the help of a swinging bell-pull rope, in hopes of rescuing his beloved Esmeralda from the top tower -- all while being slow-but-steady chased across the castle parapets by an invincible knight in full armour. Once you get the hang of any individual obstacle, the game starts throwing them at you in tandem, until toward the end you're tracking the swing of the rope, the thrust of the lance, the approach of the arrow and the advance of the knight all simultaneously. Succeed, against all odds, and you get to do it again, but faster! Even an able-bodied protagonist would have a hard time juggling all these threats, but the player must succeed controlling a handicapped person.

Reviewer: cristy baker - favoritefavorite - March 22, 2019
Subject: this game is ok
a very slow moving game and very basic. But it is very relaxing to play and de-stress.